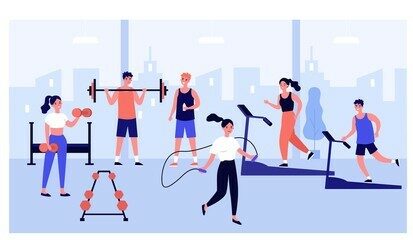 These 10 Little Known & New Facts About Exercise Are Incredible

The correlation between MPTP-induced Parkinson's and physiological Parkinsons is reliable enough for researchers to use MPTP for studies of the nervous system.

Dopaminergic receptors might be involved in exercise’s effects on memory.

PKA signaling might be required for the exercise’s effects on memory.

Exercise generally decreases the reinforcing effects of drugs of abuse, but its efficacy is variable.

Exercise may prevent drug use initiation through interactions with dopamine in the reward pathway.

Exercise may prevent relapse through interactions with glutamate, dopamine, and chromatin.

Exercise may be a useful tool for treating drug addiction.

Researchers found that exercising changed neither the amount of dopamine nor the number of neurons in the animals' brains. But in the ones that had exercised, the brain cells were using dopamine more efficiently.

Researchers in Japan have identified a new and relatively easy way to ascertain if the link between higher aerobic fitness and more efficient executive functions is mediated by activity in the brain's dopamine system. This study (Kuwamizu et al., 2021) was recently published in the peer-reviewed journal Medicine & Science in Sports & Exercise.

For this study, a team of scientists from the University of Tsukuba led by first author Ryuta Kuwamizu and senior author Hideaki Soya used spontaneous eye blink rate (sEBR) measurements to investigate if higher levels of cardiorespiratory fitness, increased sEBR, and more efficient neural activity in the prefrontal cortex are interconnected.

Although multiple neural mechanisms (e.g., BDNF, neurogenesis, synaptic plasticity) and various neurotransmitters (e.g., endocannabinoids, serotonin) influence the brain-enhancing benefits of physical activity, it's well established that MVPA and HIIT workouts increase dopamine levels and that, when it comes to the neuromodulation of aerobic exercise, the dopaminergic system is of paramount importance (Heijnen et al., 2016).

For the recent University of Tsukuba study, Soya Lab's goal was to determine if sEBR is an effective marker for tracking exercise-induced changes in neural efficiency that previous studies link to the brain's dopamine system.

There are multiple mechanisms that account for the brain-enhancing effects of exercise, including neuroinflammation, vascularization, antioxidation, energy adaptation, and regulations on neurotrophic factors and neurotransmitters. Dopamine (DA), noradrenaline (NE), and serotonin (5-HT) are the three major monoamine neurotransmitters that are known to be modulated by exercise.

How much exercise do I need?

If your doctor gives you the go-ahead, there's no reason not to reap the physical and mental benefits of a regular exercise routine. But how much exercise is the right amount?

Official exercise recommendations have increased over the years. The Department of Health and Human Services Physical Activity Guidelines for Americans (PDF, 15MB) recommends 150 minutes or 2.5 hours of moderate aerobic activity a week, or 75 minutes of more vigorous activity.

If getting started with an exercise routine sounds overwhelming, keep in mind that starting anywhere is better than not starting at all. Not sure where to begin? Think outside of the box, and try not to worry too much. Research shows that all kinds of exercise can be an effective way to manage stress and stay mentally healthy. The important thing is that you find an activity you enjoy and stick with it.

Lucky for you we have included an infographic below to help get you started.

How To Measure And Track Your Dopamine - From Home

Tracking your dopamine from home would have been considered something far-fetched and sci-fi only a few years ago.  However, at Lab Me you can track dopamine and many more neurotransmitters using a simple urine test.

It requires four collections through the day to catch the fluctuations that occur naturally.  These fluctuations give tremendous insight into how your body is responding to and coping with stress, motivation, sleep, and more.

You can get started tracking your neurotransmitters from home here.